“A Cause for Optimism”

Identification of threats and resiliency on Pacific Reefs through establishment of a long term reef monitoring network in Fiji: The Fiji Coral Reef Monitoring Network (FCRMN)

A Cause for OptimismRead More »

Mangroves are the characteristic littoral plant formations of tropical and subtropical sheltered coastlines. They are variously described as coastal woodland, tidal forest and mangrove forest.

Generally speaking, mangroves are trees and shrubs growing below the high-water level of spring tides.

Their root systems are thus regularly inundated with saline water, even though it may be diluted due to freshwater surface run-offs and only flooded once or twice a year.

Mangroves depend on terrestrial and tidal waters for their nourishment, and on coastal soils and silt deposits from upland erosion as substrate for support.

The tides nourish the forest and mineral rich river-borne sediments enrich the swamp. Thus the mangroves derive their form and nature from both marine and terrestrial influences.

Mangroves are among the most productive terrestrial ecosystems and are a natural, renewable resource. However, the world’s mangroves are beleaguered.

Mangroves are losing their habitats as rivers are dammed, their waters diverted and the intertidal zone extensively developed for agriculture or aquaculture and generally dried up.

Large tracts have been converted to rice fields, fish and shrimp ponds, industrial and land development and other non-forest uses. In parts of Asia, mangroves are home to thousands of families.

Mangrove areas are also over exploited for fuel wood and charcoal-making. In overpopulated and acute fuelwood deficit areas, even small branches and saplings are removed primarily for domestic fuel.

The depletion of mangroves is a cause of serious environmental and economic concern to many developing countries.

This stems from the fact that at the interface between the sea and the land, mangroves play a pivotal role in moderating monsoonal tidal floods and in coastal protection.

At the same time their primary production supports numerous forms of wildlife and avifauna as well as estuarine and near-shore fisheries.

Consequently, the continuing degradation and depletion of this vital resource will reduce not only terrestrial and aquatic production and wildlife habitats, but more importantly, the environmental stability of coastal forests that provide protection to inland agricultural crops and villages will become seriously impaired.

Mangroves are threatened by mass clearance. (In preparation)

We have made freely available a few of the simple Fiji Mangrove Field ID Guides we use at Marine Ecology Consulting, see this post for the downloadable pdf’s. 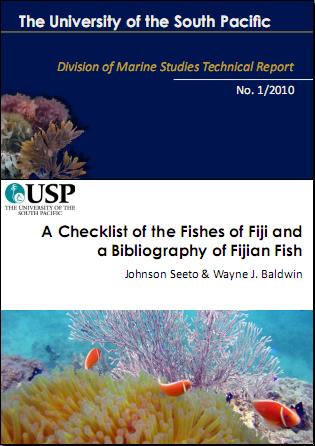 Johnson Seeto & Wayne J. Baldwin, Faculty of Science, Technology & Environment, The University of the South Pacific, have published the USP official Checklist of the Fishes of Fiji and a Bibliography of Fijian Fish

This Status of Coral Reefs of the World: 2008 report is the 5th global report since the GCRMN (Global Coral Reef Monitoring Network), was formed in 1996.

Status of Coral Reefs of the World: 2008
Complete Documents

marine ecology consulting is pleased to announce that  operations are so busy that they have expanded.

Ms Chinnamma Reddy Ms Reddy graduated from the University of the South Pacific in April 2006 with honours in Marine Biology. The following 6 months have been occupied as a Graduate Intern within the company. This has involved field work on EIA’s, monitoring of tourism properties and statistical analysis of datasets from MPA’s.

Ms Reddy excelled in all her projects and tasks so much so that she has been employed as marine ecology consulting‘s first full time USP trained Field Biologist.

Marine Ecology Consulting is committed to developing and encouraging Marine Protected Areas throughout the South Pacific region and working with Conservation organisations and NGO’s to assist communities develop their own MPA’s.

The Waitabu Marine Park was established in 1998 in an agreement of over 7 Fijian communities not to fish or anchor in the 1 km of selected fringing reef.

Aside from the small tourism business this MPA has provided a first hand example of the power of conservation, generating larger fish catches and increased bio diversity in the surrounding waters.

Community-based marine conservation projects taking place in Fiji in the 1990s were so successful at integrating stakeholders into the management and monitoring of their resources that joining the Network helped catalyze the spread of the LMMA approach rapidly through the country.

The Fiji LMMA (FLMMA) Network is the first country-level network to operate independently of the overall Network. FLMMA received the prestigious 2002 Equator Initiative Award from the United Nations Development Programme, out of more than 420 total nominations and 27 finalists

marine ecology consulting is a founding member of the Executive Committee running FLMMA as part of its charitable community support.

On our most recent visit to Taveuni we have been involved in the set-up phase of a new MPA on the Southern shores of the island at Vuna.

Helen Sykes, Marita Manley and Sangeeta Mangubhai have just finished the report on the “Contribution of Marine Conservation Agreements to Biodiversity Protection, Fisheries Management and Sustainable Financing in Fiji.”

The report, published by WCS Fiji, documents the degree and scale to which Marine Conservation Agreements (MCAs) are being used in coastal waters in Fiji. The study focuses on partnerships involving local communities and the tourism sector.

Report published and can be downloaded at GCRMN Website Publications page

A three-month pilot study of ornamental fish species collected by Walt Smith International Ltd in Fiji was carried out in order to examine the effects of fish collection pressures on the reef populations.